We’ve been outlining some pretty extraordinary items on these pages over the last few weeks.

Well, buckle up, because today we’ve got a new astonishing fact…

The Commodity Research Bureau (CRB) index is up 75% since its April low — more than double the performance of stocks over the same time period. 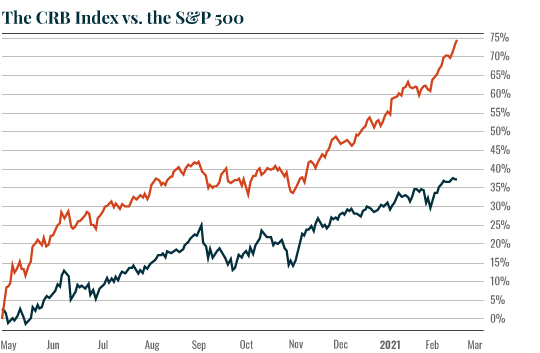 Take a look at the chart above. Does this seem normal or healthy to you: That commodities, which are essentially inflation hedges, are more than DOUBLING the performance of stocks?

The point I keep trying to hammer home — inflation has entered the financial system. And as we know from history, once it appears, nothing stops it except the Fed tightening monetary policy by aggressively raising interest rates as Paul Volcker did in the late ‘70s early ‘80s.

However, the Fed is unwilling to even acknowledge that inflation is a problem right now.

The Fed is Willfully Ignoring This

Mary Daly, President of the San Francisco Fed, said earlier this week that inflationary pressures are now “downward,” meaning inflation is disappearing. She also added it’s “not time to worry about inflation risks right now.” And that doing so would cost the economy jobs.

As if that wasn’t baffling enough, Boston Fed President Eric Rosengren commented yesterday that inflation is not likely to hit the Fed’s target until 2022. (By the way, the Fed’s target is just 2%.) 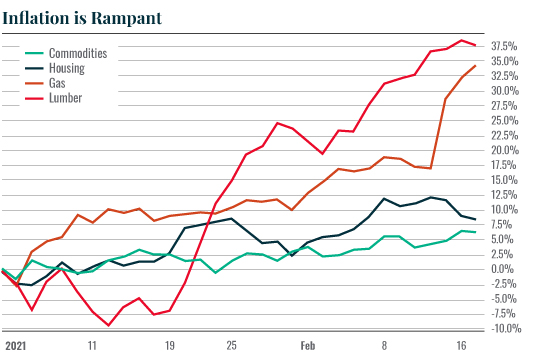 And we have multiple Fed Presidents claiming that inflationary pressures are downward and that inflation won’t hit 2% until 2022!!

Folks, the Fed is asleep at the wheel and it’s going to allow inflation to rage out of control.

The Fed just printed another $100+ BILLION this week…