The U.S. has just hit $28 trillion in debt for the first time in history. This brings our debt-to-GDP ratio to an astonishing 133%. Both are records.

The only reason we can get away with this is because interest rates are so low. However, even at current levels, the U.S. paid some $500 BILLION in interest payments last year.

Now, this situation is clearly untenable. But the really bad news is that the government has absolutely no interest in stopping it. The Trump administration ran a $3.13 trillion deficit last year. That was the single largest deficit the U.S. has ever run outside of war time.

And the Biden administration, if it manages to pass half the programs it has proposed (a $2 trillion infrastructure program, $2-plus trillion for climate change, not to mention even MORE stimulus), will beat even that.

Cynics will point out that the U.S has been massively in debt for years without experiencing a crisis.

But it’s also true that the U.S. wasn’t previously running the largest “non-war time” deficits while the economy was actually growing.

Nor was it true that the U.S. was run by presidents who introduce multi-TRILLION-dollar programs every month.

Bonds Continue to Threaten a Breakdown 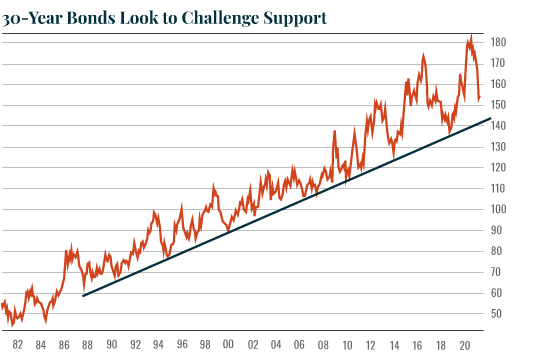 Will this be the time it finally breaks that line? I don’t know.

But I DO KNOW that if the U.S. government continues spending money at its current pace, we will confront a debt crisis in the near future.

I don’t know if it happens when we hit $30 trillion in debt, or $35 trillion or some other number. But we are currently spending some $2.50 in debt for every $1 in growth.

It’s not difficult to see where this is going.

I’ll outline what I expect the Fed to do about it tomorrow. Until then…