Graham’s out sick today, so I thought I’d jump in and share one of his most-read posts of the year so far. And the timing for this “best of” couldn’t be better. Because his original analysis appears to be spot-on…

Back in January, Graham laid out what he believed was going to be one of Joe Biden’s BIGGEST problems — the U.S. Dollar.

At the time the dollar had been tanking and was testing MAJOR support.

In the intervening months, the greenback tried to muster some strength but, not surprisingly, has pretty much failed.

And now we’re back where we were when he first sent that letter. 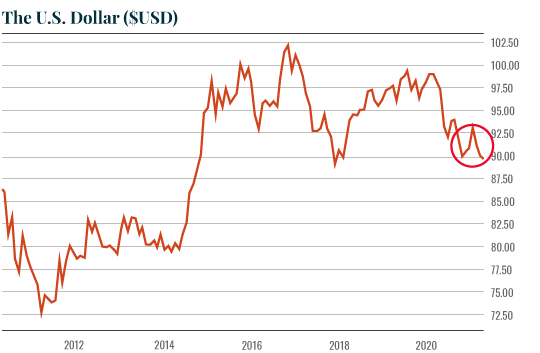 Given that little has changed for the dollar (except for one more failed rally), I thought it’d be good to take another look at what his longer-term outlook was based on that analysis.

You can check it out here.

What’s the Current Consolidation Telling Us?