Yesterday I outlined THE single most important development you need to see, in order for the market to crash.

Think of them as BIG warnings, or the FOUR Horsemen that precede a stock market apocalypse.

When most heavily weighted companies began to break down badly.

Technically, the S&P 500 is made up of 500 companies. However, each of those 500 stocks don’t receive the same weight from the index. Rather, certain stocks receive a disproportionate weighting giving them a much larger impact on the market’s price action.

Of these, IBM, XOM, GE and T have charts that are easy to find. So, let’s review them.

In 1987, International Business Machines Corp (IBM) had already taken out both its 50-DMA and its 200-DMA before the crash hit. Put another way, the largest company on the index (the equivalent of the tech sector today) had already broken down VERY badly.

Exxon (XOM) had yet to look as terrible, but it was clearly struggling, having traded sideways for months before finally breaking down.

General Electric (GE) looked awful, breaking its uptrend and falling below its 50-DMA long before the Crash hit.

AT&T (T) was the only one that looked remotely good, as it was still in something of an uptrend when the crash hit.

For space reasons, we’re only looking at four of the top 10 companies today. But if you were to look at all 10 charts, you’d quickly see that the majority of them had entered downtrends, and were breaking down badly, weeks before the Crash hit.

So does this impact the market today? Put another way, how do we know when THIS will happen? 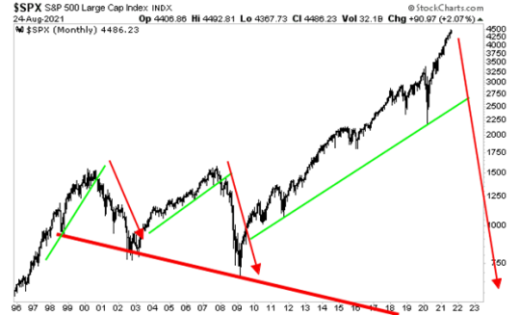 I’ll outline that in tomorrow’s article. Until then…

The Four Horsemen of the Coming Crash, Pt 3

For of the top five are looking strong (for now)