Get Ready for the “Santa Rally”

The stock market opened as a sea of red but bottomed at 10:15 AM and never looked back. The bears even failed to take advantage of the drop in momentum that hit around 2:30PM. Buyers stepped in during the last five minutes to cause a final price spike.

You can see all of this in the chart below. 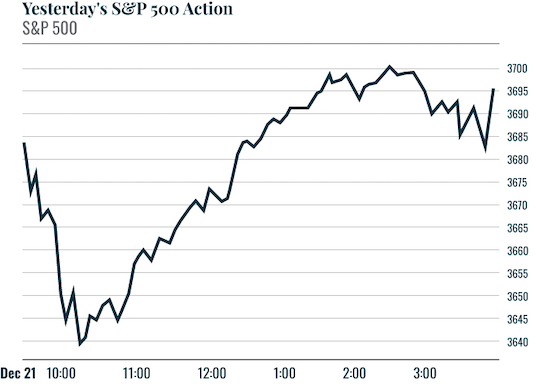 What does this mean?

If the bears (sellers) cannot push the market down more than 1% on a day in which it is announced there is a new strain of COVID-19 hitting the UK, then it is highly likely we will see a “Santa Rally” to finish the year.

Here’s Why Santa is Coming to Town

Remember, you and I are small fish in the markets. The big fish, the ones that can determine where things go, are fund managers at large hedge funds and financial institutions who manage hundreds of billions of dollars in assets…

Most of these people have had a truly terrible year this year. Few if any of them accurately timed the COVID-19 meltdown from February into March. And even fewer of them bought at the lows in late March or April for that matter.

According to Aurum’s Hedge Fund Data Engine, the average year-to-date performance for hedge funds at the end of November was 5.6%. The S&P 500 is up nearly THREE TIMES that at roughly 14%.

All of the folks managing these funds will be desperate to push stocks higher so they can finish the year with the best possible returns. And with trading volume being relatively light this week due to the Christmas holiday, there is the potential for an explosive move into year-end. 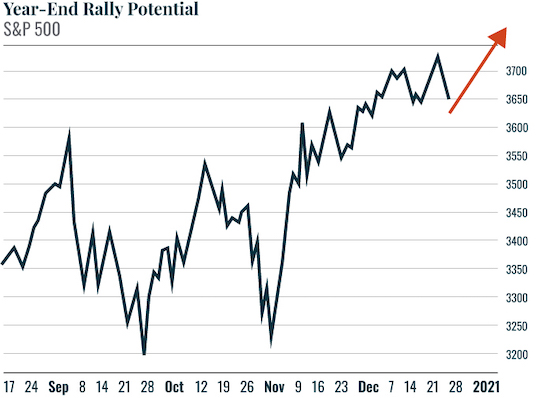 Something to think about.

It’s a new year, but little has changed when it comes to the Fed