How Does the Fed Deal with Inflation?

Yesterday I pointed out how inflation has become deeply embedded in our financial system.

As a quick recap, inflation arrives in stages.

As I noted yesterday, all three of these phases are in place. This tells us that inflation is now deeply embedded in our financial system.

Historically, the only thing that has stopped inflation is the Fed tightening monetary policy by either hiking interest rates or tapering its Quantitative Easing (QE) programs.

During the last inflationary scare in 2010-2011, the Fed allowed its QE2 program to end. It then waited several months before introducing any new monetary programs. When it finally did introduce one, it didn’t involve money printing. Instead, the Fed used the proceeds from Treasury sales to buy long-dated Treasuries through a process called “Operation Twist.” This was a kind of stealth tightening.

Bear in mind, that was a relatively minor inflationary scare. During the last legitimate inflationary storm in the 1970s-1980s, the Fed was forced to be MUCH more aggressive with its tightening, raising the Fed Funds rate (the interest rate it charges banks on overnight loans) from 4.5% to over 19%! It’s worth noting that this triggered two SEVERE recessions (shaded areas). 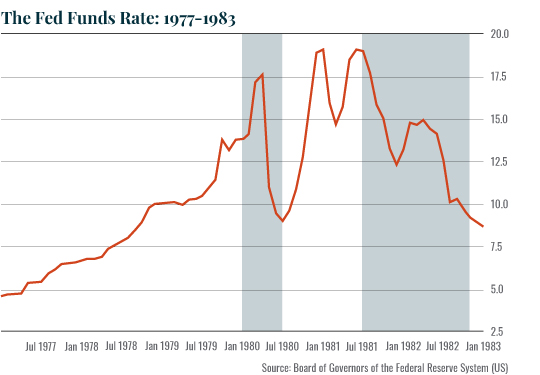 The Fed’s Plan for Today’s Inflation

The answer may surprise you…

Powell is not alone. Fed officials across the board have referred to inflation as “transitory” stating that even if inflation rises above the Fed’s target of 2% (say to 2.75% or even 3%), it’s not a big deal.

(Bear in mind, inflation is already well over 3% now.)

So, what does this mean?

The Fed will continue to keep interest rates at zero, printing $125 billion per month all while ignoring the countless signals that inflation is already spiraling out of control. Yes, the Fed will eventually be forced to act once inflation becomes a political issue, but until then the Fed will have its “blinders” on.

Which means… inflation is going to rage and rage.

What does this mean for the markets?

We’ll dive into that tomorrow. Until then…

You’re paying more, and you don’t even realize it…