Inflation is Now Entering Its Final and WORST Stage

As I’ve been outlining for the last several weeks, the Fed and other central banks have finally succeeded in unleashing inflation.

The Fed and its ilk are trying to downplay this by saying the inflation is “transitory.” But who are you going to believe… your own eyes or the words of a Fed official who is literally paid to say things that downplay systemic risks?

Year-to-date, the price of copper, gasoline, corn and soybeans are all up double digits. 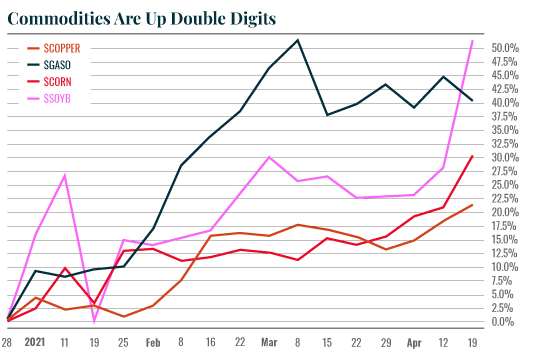 The last two (corn and soybeans) are the most concerning as the Fed’s own research shows that food inflation is the single best predictor of future inflation.

And unfortunately, things are about to get a whole lot worse…

The Worst Part is Still Ahead

You see, inflation arrives in stages. It’s not as though it enters the financial system and POOF suddenly the cost of everything rises.

Instead, inflation slowly works its way into the financial system in phases.

The first stage occurs in the manufacturing/production segment of the economy when you see producers suddenly paying more for the raw goods they use to produce finished goods.

You can see this development in the chart above. The prices of things like copper, gasoline, corn and especially soybeans are all spiking higher.

Now, one or two months of higher commodities or raw goods is no big deal, but once you're talking six to eight months of steadily rising prices, it's significant. At that point manufacturers have to start raising the prices on finished goods or face shrinking profit margins

At that point you move into the second stage of inflation: when the prices of consumer items begin to increase.

We are now entering that phase as the headlines below show.

This is where things start to get nasty. Once you start seeing price hikes appear in the broader, consumer-level economy, inflation has become systemic. At that point the only thing that will stop it is if the Fed begins to tighten monetary policy (raise rates, taper QE, etc.).

Bad news here too… the Fed has explicitly stated it has no interest in raising rates or tapering QE for another TWO YEARS.

Which means... inflation is going to rage and rage. And the damage done will be measured in trillions of dollars (that’s trillions with a "t").

During inflationary times like these, one of the best ways to protect your wealth is with precious metals. Especially the overlooked ones like silver. I’ve written about the potential strength building in silver numerous times including here and here.

If you think adding some precious metals to your portfolio would be a good idea, I’d like to introduce you to one of our partner companies (which we own a stake in) — Hard Assets Alliance. They can handle all your needs when it comes to buying, selling and even storing your precious metals.

You can get more information about them here.

SEE How Inflation is Crushing You Right Now

These numbers will blow your mind…