Inflation Update: Even the Fake Numbers are BAD

Over the last week I’ve been outlining how the Fed will soon be forced to launch a “yield curve control” program. In this scenario, the Fed launches an open-ended QE program through which it prints money to buy bonds anytime yields rise above a certain level (for example, 1.5% on the 10-Year U.S. Treasury Note).

The reasons the Fed will do this are:

This last issue is the most important.

CPI clocked in at 0.9% month-over-month for the month of June. For those who claim these bad inflation numbers are due to the “base effect” (meaning inflation only appears to be up because last year’s numbers were so low during the COVID-19 collapse), consider that this was the largest month over month spike since 1981. And consider what was going on in 1981…

At that time, inflation was in the double digits and the Fed was in the process of raising interest rates to 19% to try and stop it.

By the way, the CPI number, as bad as it was, dramatically understated how bad inflation has become. For instance, the Bureau of Labor Statistics (BLS) claims the “shelter” portion of the inflation data is up only 2.6% year-over-year.

Yet housing prices are up 14% year-over-year. They are currently rising at the fastest pace since the Real Estate Bubble of 2007… when housing was in its single largest bubble in 80 years. 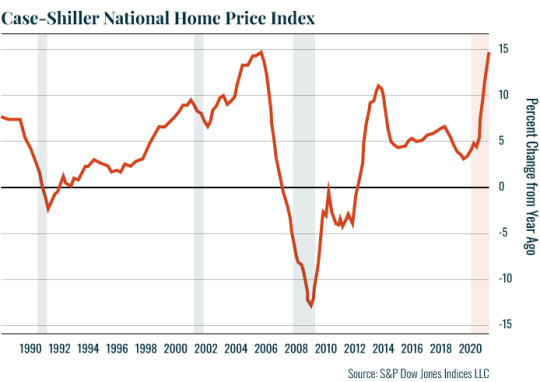 The BLS also claims healthcare spending is only up 1.0% year-over-year. We all know that’s a complete joke as well.

So, provided you don’t count the cost of housing or medical care or food or energy, inflation is under control. Bear in mind the BLS is making this claim at a time when 48% of small businesses are reporting raising prices… a 40-year high.

Again, inflation is roaring. And even with the multiple gimmicks the BLS uses to downplay inflation, the official numbers are still posting their highest month-over-month jumps in 40 years.

This is why the Fed will be forced to launch yield curve control… the attempt to corner bonds so yields don’t spike based on inflation… just as they and every other central bank have been doing since the 2008 crash.

The Fed is at it again…