As I’ve been trying to hammer home for the last few weeks, inflation has arrived in the financial system.

But if inflation is rampant in the financial system, how come it isn’t obvious when we go to the store?

Because inflation is, in fact, a complicated thing. It’s not as though it hits and BOOM — prices explode higher across the board.

Inflation arrives in stages. And courtesy of how corporations work to mitigate it, the effects can be subtle at first.

The Different Stages of Inflation

The first stage occurs in the manufacturing/production segment of the economy; when you see producers suddenly paying more for the raw goods and commodities they use to produce finished goods.

You can see this development in the chart below. As I’ve been noting for weeks, the prices of raw materials like copper, gasoline and commodities have all spiked double digits in the last six months. 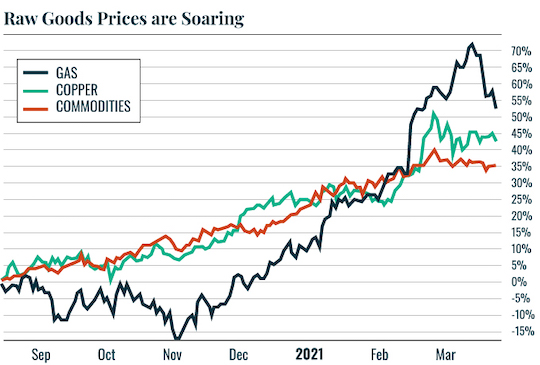 One or two months of higher prices is no big deal, but once you're talking 6-8 months of steadily rising prices it becomes significant. At that point manufacturers/producers have to start raising the prices of finished goods or face shrinking profit margins

At that point you move into the second stage of inflation: when the prices of finished goods begin to increase.

Management at companies don't just say "raise the price now!" Instead they can do different things such as charge the same amount for less of a finished product by shrinking the size of the container. This is called “shrinkflation.”

Maybe you’ve noticed that the 16-ounce can of coffee you buy at the store for $6.99 has quietly become a 12-ounce can. That’s shrinkflation.

Another strategy is to start using cheaper/lower quality raw goods (to reduce costs/quality) while charging the SAME amount for the finished good. This is a form of inflation as well.

The effect here is that you get less quality for the same price. And we are about to enter that period of time for the economy.

This is when things get ugly for the markets.

Stocks love inflation at first, but that love quickly turns to hate. During the last bout of hot inflation in the 1970s, stocks initially bubbled up before CRASHING nearly 50% in the span of two years, wiping out ALL of their initial gains and then some. 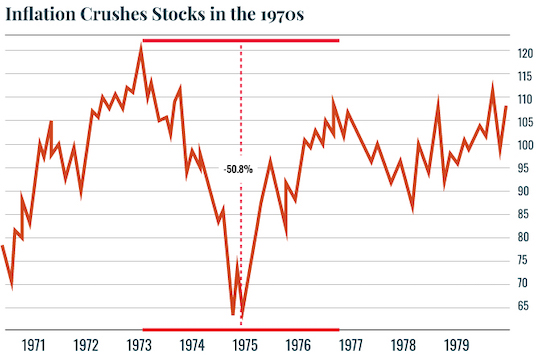 As I keep warning, inflation is going to ANNIHILATE investors’ portfolios.

Those who are properly prepared. however, will make literal fortunes.

Stocks Are Now in Serious Trouble

Here’s what you need to know…