“Is This a Good Time to Buy Gold?”

I want to thank you and all my readers for the questions you submitted!

A number of those questions were about gold; specifically whether or not it’s a great time to buy gold based on inflation.

First and foremost, we need to mention the fact that gold is a VERY volatile investment. It is not unusual for it to lose 20% or gain 20% in a matter of months as the chart below indicates. 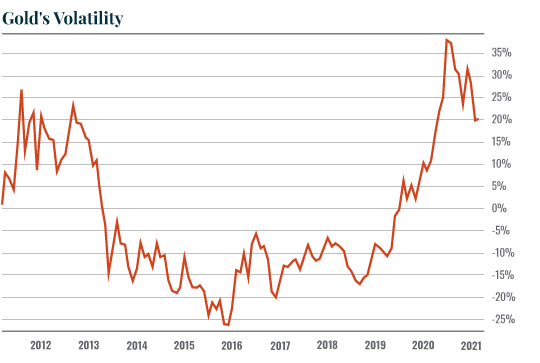 With this in mind, the answer to the question “Is this a good time to buy gold?” hinges 100% on your time horizon.

Investing for the Looong Term

If you are someone who thinks about investing in terms of years, and who doesn’t care if you lose 20% in a few months based on short-term fluctuations, then gold is a TERRIFIC investment.

Indeed, gold has dramatically outperformed the stock market for the better part of the last 60 years.

However, gold was pegged to global currencies up until 1967. Stocks weren’t. Comparing the two during this time period is just bad analysis.

However, once the gold peg officially ended with France dropping it in 1967, the precious metal has outperformed both the Dow and the S&P 500 by a massive margin.

The only time period in which stocks beat gold was during the Tech Bubble: the single largest stock market bubble of all time. Every other time period saw gold outperform stocks by a wide margin. In fact, stocks only just caught up to gold after trailing it for the better part of the last 15 years! 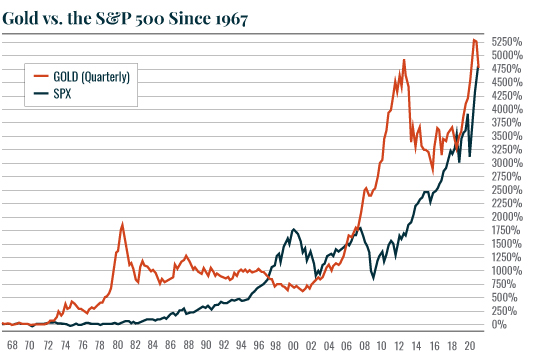 So, if you are thinking about investing for the LONG TERM, as in “I’m buying gold and likely will not ever sell,” then yes, it’s almost always a good time to buy gold.

Bear in mind however, there will be periods in which your investment goes NOWHERE or worse, loses a LOT of money. An example of this is from gold’s peak in 2011 to its bottom in 2016, when it lost nearly 50% of its value. 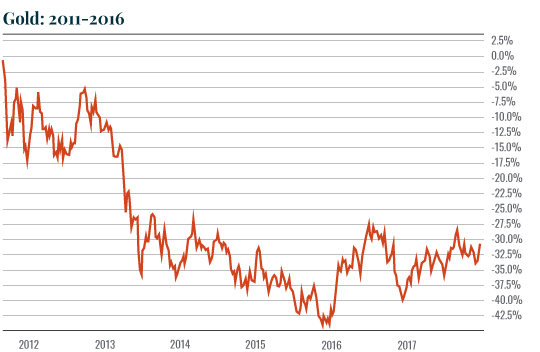 So be advised, the success of the strategy to buy gold and hold it is 100% contingent on you actually stomaching some multi-year periods in which gold loses quite a bit of money. But again, if you are willing to sit on this investment and never sell, you’ll end up doing very well over the long term.

But what about gold as a macro trade based on the idea that inflation is entering the financial system?

I’ll address that strategy in tomorrow’s article. Until then…

“Gold as a Near-Term Inflation Trade?”