It’s Official — the Fed is in Denial

The Fed just announced that it is going to let inflation rage.

They didn’t use those words, but in “Fed speak” that is precisely what Mary Daly, president of the San Francisco Fed, said yesterday.

As I’ve clearly laid out in the last few weeks, inflation has already entered the economy. We see it in food prices, energy prices, housing prices, just about anything you can name.

Heck, gold has even exploded to new all-time highs in every major currency.

Yet despite all this, Fed President Daly stated with a straight face, that inflationary pressures are now “downward” — meaning inflation is disappearing…

More than that, she said it’s “not time to worry about inflation risks right now.” And that doing so would cost the economy jobs.

Put simply, at a time when inflationary pressures are already rising at a pace not seen in decades, one of the top Fed officials commented that inflation is moving “downward.”

This is the closest thing you can get to the Fed formally endorsing a hot inflation regime.

Remember, once inflation appears in the financial system, the only thing that can stop it would be the Fed aggressively hiking rates as Paul Volcker did in the early 1980s.

This time around, when inflation is clearly already running hot, the Fed is not merely unwilling to raise rates… but it won’t even admit that inflation is present.

This is a recipe for a truly horrific inflationary storm. Think the 1970s: Double digit inflation with a crumbling economy. Agricultural commodities prices are already up nearly 40% in the last seven months alone! 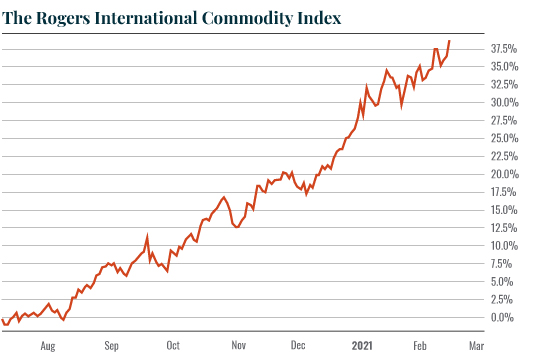 Be forewarned. Inflation is here. It’s going to get worse. And the Fed is asleep at the wheel.

This market DOUBLED the performance of stocks…