Lessons from the Master Himself

Yesterday I outlined one method for identifying stocks that outperform the broader market in terms of inflation-adjusted returns.

Why do we care about inflation?

Because, as I showed earlier this week, MOST stocks don’t produce REAL wealth.

Remember, the U.S. stock market is priced in U.S. Dollars ($USD). And over the last 20 years, the $USD has lost nearly 40% of its purchasing power. So, when we adjust for this by pricing stocks in gold (an asset that cannot be devalued by the Fed), we see that stocks are in fact DOWN some 50% from their 1999 peak. 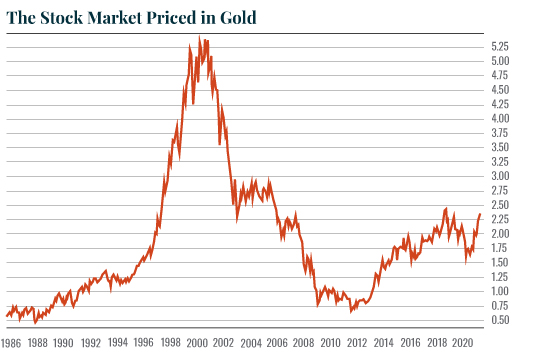 Now bear in mind, I’m not saying stocks are a complete waste of time. I’m simply saying that if you are piling your money into an index fund, most of your gains are coming from the new money you put in… not stock appreciation.

For this reason, Warren Buffett and other legendary stock pickers focus on picking stocks that are growing rapidly to the point of outpacing inflation by a wide margin.

Buffett began loading up on Coke in 1988. At that time, he noted, among other things, that the company is able to raise the cost of its product to beat inflation without losing consumers (a term he calls “economic goodwill”).

You can watch it here. (He starts speaking about Coke at the 25-minute mark.)

Listening to Buffett explain his investing philosophy in his own words, it’s clear that 99% of what’s written about him is wrong.

For Buffett, there is no “model” or “formula” for investing. Instead, he focuses exclusively on understanding the business he is buying, and buying it at a reasonable price.

During his entire 50-minute lecture to Florida’s MBA graduates, Buffett didn’t mention P/E ratios once. In fact, very little of his talk even involved financial metrics. Anyone who wasn’t familiar with his track record would have thought they were listening to a very successful businessman, not a guy who picks stocks for a living.

And they would be right.

A stock picker would have sold Coke at its peak in the late ‘90s. In fact, a stock picker probably wouldn’t have invested in Coke in the first place since the business is not particularly glamorous or exciting.

However, Buffett, as one of Coke’s largest shareholders, would note the following:

I strongly urge you to watch some of the video. It’s extremely enlightening, especially in light of the inflationary backdrop the markets are in today.

The Slippery Slope of Inflation