Get ready for a tsunami of liquidity to hit the financial system in the coming weeks and months.

President Trump has already signed a $908 billion COVID-19 stimulus bill that will give $600 to most Americans. The President was adamant that $600 was not enough, demanding that Congress pass a second bill that would raise the total amount to $2,000 per person.

The House of Representatives passed a bill that would accomplish this. However, for political reasons, the bill stalled in the Senate. It will now be incumbent on the incoming Senate (sworn in today) to follow through on this. I would imagine the Senate will pass some version of this bill once the January 5 Senate runoff elections in Georgia are finished.

If and when that happens, there’s potentially another $1.3 trillion ($908 billion + $463 billion) in newly printed money flowing into the economy in the next few weeks.

The Fed is Doing Its Part

Meanwhile, the Fed has just pumped $162 BILLION into the financial system in the last two weeks alone. 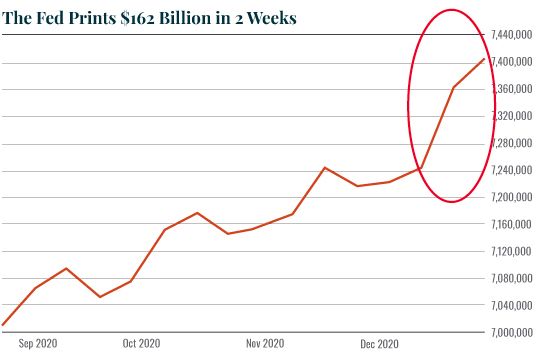 During the apex of its monetary policy response to the Great Financial Crisis of 2008, the Fed was printing $80 billion in new money per month.

This brings the Fed’s total money printing for 2020 to over $3.2 trillion. That’s larger than the UK’s GDP!

So this year we’ve seen:

3) The soon to be signed $463 billion stimulus program

Add it all up, and you’re talking about $6.45 TRILLION in new money being printed and funneled into the US economy/financial system in the span of 12 months. That’s roughly 31% of the US’s GDP.

This is going to create an inflationary storm.

I’ve previously written about how the Fed’s own research has shown that food inflation is the best predictor of future inflation. With that in mind, the 10-year bear market in agricultural commodities has ended. 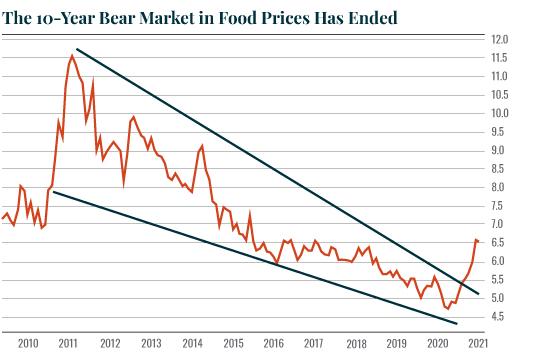 What you’re looking at is the 10-year bear market in food prices ENDING. This chart is telling us that higher inflation is coming. And coming soon.

This is the BIG theme for 2021 no matter what else may come: more money printing, more inflation, and more explosive moves in inflationary assets.