Sure, We’re Heading into a Bubble

Over the last two days, we’ve discussed why “who” is running the Fed is so important to the fate of the market.

Here are the major points we covered…

This suggests that the Fed’s current leadership is open to allowing another massive bubble to form in the stock market, much as Alan Greenspan’s Fed did in the late ‘90s.

So today we’re looking at this policy from the perspective of market action.

The problem with bubbles is that they can take much longer to burst than ever seems possible. During the Tech Bubble, stocks, as measured by the NASDAQ, rose by average annual gains of 40% for the six years from 1991 to 1997… And that was BEFORE Alan Greenspan suggested it was impossible for the Fed to predict bubbles! 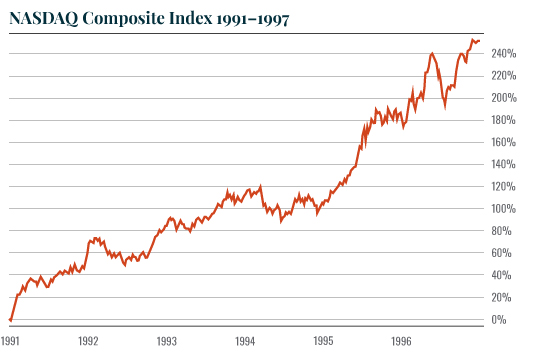 What followed was even more astonishing… Gains of 260% in just three years — that’s annualized gains of 80-plus%!!! 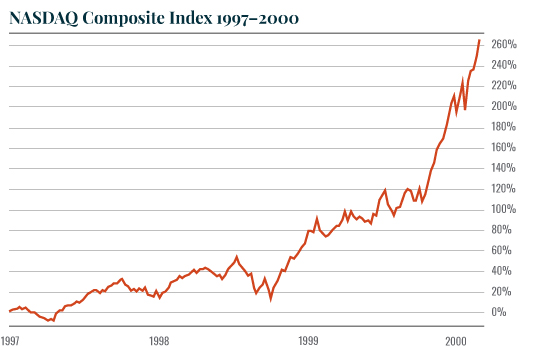 Someone who was trying to predict a collapse would have probably bailed in late 1996, right around the time Greenspan gave his famous “the Fed cannot predict bubbles” speech.

After all, within two years of that speech, the NASDAQ’s price-to-earnings ratio was at 30. Six months later it was at 50. And another six months down the road it was over 70.

Seeing this, a rational, bubble-wary investor would have bailed on stocks somewhere between 1997-1998. But he or she would have missed out on another 200% gain in the market… and the potential for once-in-a-lifetime returns.

This is the problem with being overly wary of bubbles… you run the risk of missing out. And given human psychology (how difficult it is to see everyone getting rich while you’re on the sidelines), I would wager the vast majority of “rational investors” would have ended up piling back into stocks right around the top.

So, what is a profit-focused investor to do?

Ride a bubble as long as it runs, with an eye on the exits.

I’ll detail what the current levels are for “getting out of stocks” in tomorrow’s article.

How to Know If the Market Is Ready to Crash

A look at the market’s internals will show you…