The U.S. Dollar ($USD) is in serious trouble.

As I noted in yesterday’s article, the ratio between the S&P 500 and emerging markets is on the verge of ending its decade long bull trend. See for yourself.

When the S&P 500 outperforms EEM, this chart rallies, and when EEM outperforms the S&P 500, this chart falls. As you can see, this chart has been in a steady uptrend for the better part of the last decade (since 2011 to be exact). However, that uptrend appears to be ending. 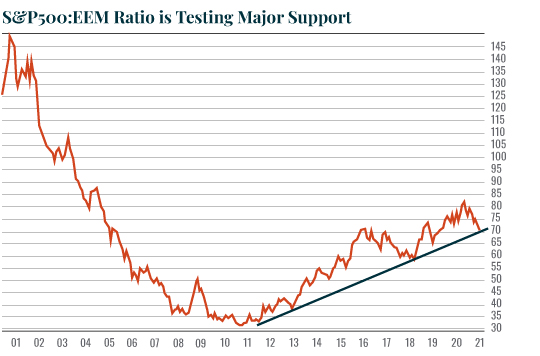 From a purely stock market perspective, if this trendline is taken out, it would mean stocks are entering a prolonged period during which emerging markets outperform the S&P 500 (similar to what happened in 2001-2011).

This means that you would want to have exposure to emerging market stocks more than U.S. stocks.

However, there is another, far more important and systemic issue related to this ratio.

Historically this ratio has led the $USD by several months. So if this chart breaks down in a big way… so will the $USD.

The chart below shows the ratio between the S&P 500 and Emerging Markets ETF (EEM) (blue line) overlaid with the $USD (black line). As you can see, the S&P500:EEM ratio has typically led the $USD by several months. 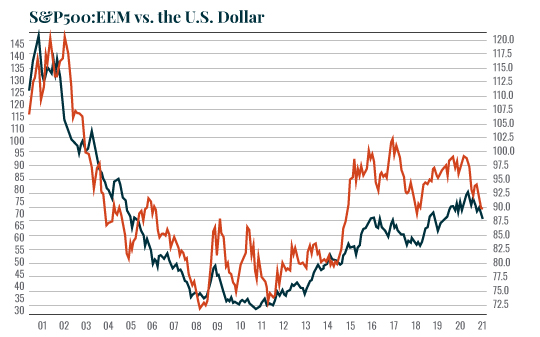 So if the S&P500:EEM ratio is about to take out its bull market trendline and start collapsing, it would mean we could expect the $USD to fall dramatically just as it did from 2001-2011.

Put simply, this would mean the $USD collapsing in a secular bear market as inflation erupted in the financial system. Precious metals would EXPLODE higher as would commodities, crypto currencies, and every other “weak $USD” play you can imagine.

The “Hard” Markets to Keep Your Eyes On

Signs of an inflationary dollar collapse are building. Here’s what to watch…