Yesterday I explained how the official inflation statistic used by policymakers, the Consumer Price Index or CPI, is practically useless.

I realize this is quite controversial. After all, everyone on the planet from hedge fund managers to social security administrators uses this data point as THE inflation measure.

Unfortunately for them, CPI is pretty much useless. It doesn’t accurately measure inflation in any way shape or form.

Today, I’m going to let you in on a little secret.

The Fed knows this.

Back in 2001, the Fed had several researchers dive into the subject of inflation. Their goal was the analyze whether the Fed’s preferred measures of inflation (the CPI and the Personal Consumption Expenditures or PCE) are decent predictors of future inflation.

The Fed also investigated a whole slew of other inflation measures for comparison purposes.

The Fed found that food inflation, NOT CPI or PCE, is the best predictor of future inflation. Fed researchers wrote the following:

I want you to focus on these two admissions:

With that in mind, take a look at what is happening with agricultural commodities, which are the primary supplies for food. 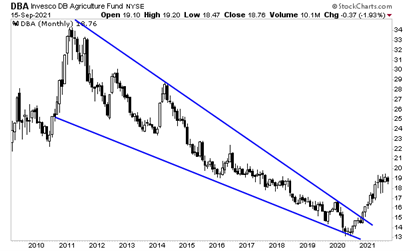 You are looking at the end of a 12-year bear market… and the beginning of a new bull market.

If you think this is going to go well for stocks, you are mistaken. During the last major bout of inflation in the 1970s, stocks initially ripped higher for a few years before crashing ~50% erasing all their gains and then some. Even worse, the stock market finished the decade having gained ZERO in 10 years.

The big question is how to profit from all of this?

I’ll detail that in tomorrow’s article.

Comparing the past year’s inflation in food prices to the prices of other components that comprise the PCEPI (as in Table 1), we find that the food component still ranks the best among them all…