The Four Horsemen of the Coming Crash, Pt 3

Over the last two days, I’ve outlined THE single most important development you need to see, in order for the market to crash.

Think of them as BIG warnings, or the FOUR Horsemen that precede a stock market apocalypse.

When most heavily weighted companies began to break down badly.

Technically, the S&P 500 is made up of 500 companies. However, each of those 500 stocks don’t receive the same weight from the index. Rather, certain stocks receive a disproportionate weighting giving them a much larger impact on the market’s price action.

Yesterday we reviewed the 1987 crash, noting that the vast majority of the 10 most heavily weighted stocks had broken down in clear warnings that the market was in serious trouble.

Let’s apply this same methodology to today’s market. Today, the top 10 most heavily weighted stocks in the S&P 500 are:

Note that out of an index of 500 companies, these 10 alone account for nearly 30% of the market’s weight. So, in order for the market to crash, we need to see them breakdown badly.

Apple (AAPL): this stock is clearly in an uptrend. 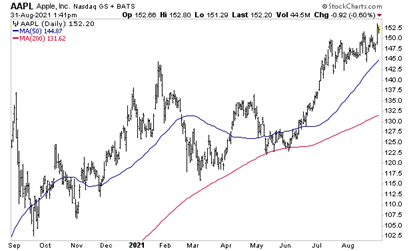 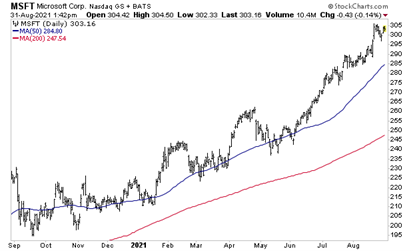 Amazon (AMZN): this is a weak chart. AMZN has been chopping back and forth for a year now. It’s not as bad as if the company had entered a definite downtrend, but it’s still pretty bad. 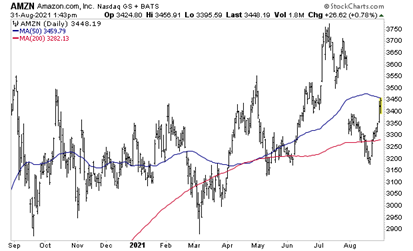 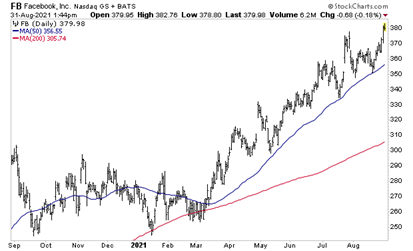 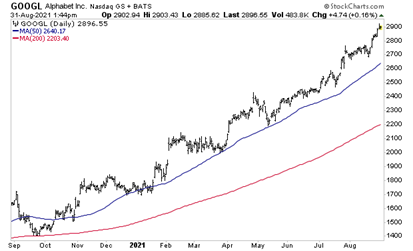 Put simply, out of the top FIVE companies in the S&P 500, which account for nearly a quarter of the market’s weight (22.8% to be exact), FOUR of them are in strong uptrends.

While the market is definitely in a bubble, until these companies break down, the odds of a crash remain small. So, for now, it’s best to let this bubble run. Just keep an eye on these companies. Once they start to break down, you’ll know it’s time to start getting defensive.

Stocks Won’t Crash Until This Happens