The “Hard” Markets to Keep Your Eyes On

Yesterday I noted that the U.S. Dollar ($USD) is in serious trouble.

Historically, the ratio between the S&P 500 and emerging markets — represented by the Emerging Markets ETF (EEM) – has led the $USD by a few months.

The chart below shows the S&P 500:EEM ratio (blue line) overlaid with the $USD (red line). As you can see, the ratio between the S&P 500 and emerging markets has typically led the $USD by several months. 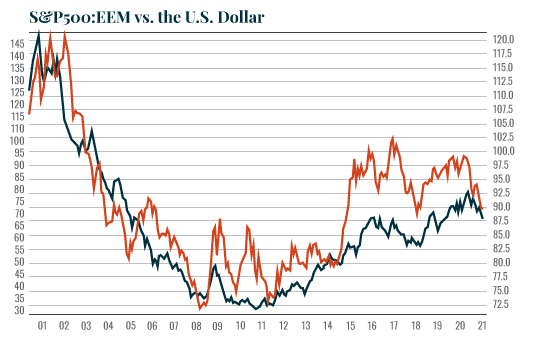 What this chart is telling us is that we can expect the $USD to fall dramatically just as it did from 2001-2011.

This is going to ignite bull markets in inflationary hedges.

This has already started.

Bitcoin (BTC) is the single most aggressive anti-$USD investment out there. Take a look at what Bitcoin has been doing. Of course, nothing goes straight up or straight down in investing, so I’d expect a correction soon. But this is a taste of what’s to come for inflation hedges as things begin to spiral out of control. 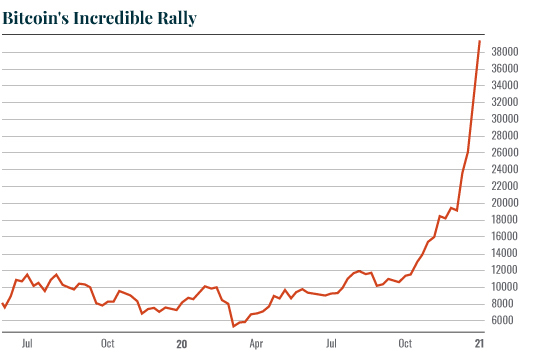 I’m talking about things like precious metals, lithium, uranium, and other natural resources.

This is the big picture macro framework for the world today.

In this framework, the clearest implication for an investment strategy is to look for finite assets that are relatively rare.

Think of it this way, in a world awash in currency, anything that cannot be devalued (a hard asset) will be of increasing value. This will prove particularly true for those hard assets that are relatively rare and which are experiencing increased demand.

Inflation Is Here and It's Only Going to Get Worse

These charts prove it…