The Precious Metal Your Broker Didn’t Tell You About

Over the last three days, I’ve outlined how gold is telling us that the Fed WILL NOT move to stop inflation.

By way of a quick recap…

1) The Fed can stop inflation anytime it wants to buy tightening monetary policy.

2) The multi-trillion-dollar question for the last year has been, “WILL the Fed act to stop inflation or not?”

3) Gold has just indicated the answer is probably “NOT” as it erupted out of a nine-month downtrend.

It all sounds fantastically bullish for gold. But when it comes to investing in precious metals, there are far greater opportunities than just gold and silver.

In fact, those two aren’t even the most precious of precious metals: there’s also platinum, palladium, ruthenium, osmium, iridium and more.

At the top of the pyramid is rhodium, the single most precious metal in the world.

Indeed, rhodium is so rare that there isn’t a single primary deposit anywhere in the world. Instead, it is found as a byproduct of platinum or nickel mining.

Now, one of the chief arguments against investing in gold is that it doesn’t experience any industrial demand.

This is not the case with rhodium: The precious metal is a key component used in the creation of catalytic converters, which reduce emissions in automobiles. All told, this accounts for over 80% of global rhodium demand. 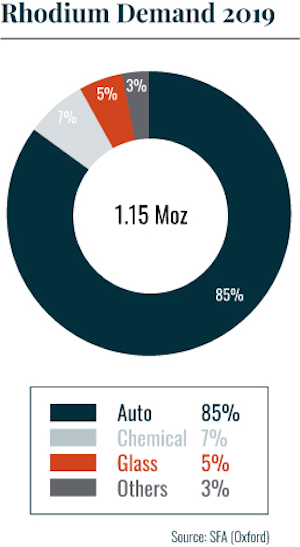 When you combine massive industrial demand with extreme rareness, you have a recipe for incredible gains. With that in mind, take a look at the chart below comparing the performance of rhodium against that of gold since 2017. 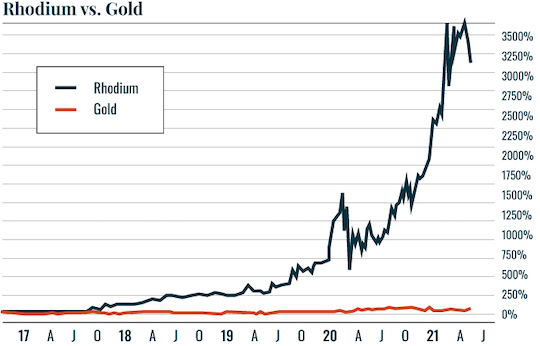 Again, this is just over the last three years!

I recently told my Strategic Impact subscribers about a precious metals producer that is one of the largest rhodium producers in the world. In fact, it’s rhodium production alone accounted for nearly 25% of its revenues in 2020.

(I share these little known, but (potentially) hugely profitable plays with them every month.)

Why You NEED to Have Some Exposure to “Blue Gold”

Another precious metal to boost any portfolio…