As I outlined yesterday, the chart below is the single most important chart in the world for the Fed. 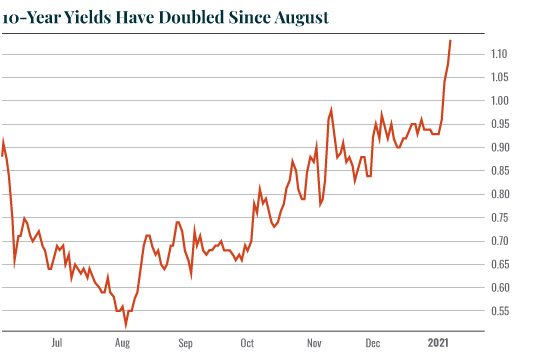 This is the yield on the 10-year U.S. Treasury, the single most important bond in the world. This yield represents the risk-free rate of return in our current financial system. It is literally the rate against which all risk assets are priced.

As you can see, the yield has doubled since August — and is now going vertical. The reason for this is inflation: bond yields (among other things) trade based on inflation. So, with inflation rising in our financial system, the yield on the 10-year U.S. Treasury is also rising to accommodate this.

And that is a HUGE problem for the Fed.

The last real bout of inflation the U.S. experienced was in the 1970s. At that time, the only thing that stopped the inflationary storm was Federal Reserve Chairman Paul Volcker who raised interest rates to an astonishing 19%.

This nearly imploded the debt markets, triggered a severe recession, and forced many Americans into bankruptcy (imagine owning a mortgage with 18% interest).

And bear in mind, the U.S. owed less than $1 trillion in debt at the time!

Today the U.S. owes $27 trillion in debt. And with inflation causing bond yields to rise again, there is no Paul Volcker-type Fed official willing to do “whatever it takes” to stop it.

Which means inflation is going to rage and rage.

At some point, the Fed will be forced to choose…

They will be forced to either:

Because of how our current financial system is structured. U.S. Treasuries are the senior-most asset class in the world. As I mentioned before, the yields on these bonds represent the risk-free rate of return against which all risk assets are priced.

This means if Treasuries begin to collapse, forcing yields through the roof, it will result in crashes in stocks, real estate, corporate bonds, and municipal bonds all at the same time.

There is another even more terrifying issue too. The crisis in 2008 was triggered by a particular type of derivative called Credit Default Swaps (CDS). At its largest, the CDS market was $50-60 trillion in size.

The derivatives market based on bond yields is over $500 trillion in size. It is literally 10 TIMES larger than the CDS market was in 2008. So, if we see a bear market in bonds, you’re talking about a crisis that would be exponentially worse than 2008.

Think stocks losing 75% of their value while every major bank goes bust.

Suffice to say, the Fed doesn’t want that. Which is why I believe the Fed is going to let the $USD collapse.

I’ll detail how in tomorrow’s article. Until then…