Yesterday, I noted the unprecedented amount of money printing policymakers have employed in the last 12 months.

As a brief recap, various analysts and investing legends have recently pointed out that:

3) Under Jerome Powell, the Fed bought more Treasuries in SIX WEEKS than it did in 10 years under Ben Bernanke and Janet Yellen.

4) Corporate borrowing, which usually drops during recessions, actually INCREASED by $400 BILLION during the COVID-19 pandemic.

This is truly historic stuff.

Again, we’re talking about monetary interventions that DWARF the Fed’s policy response to the 2008 crisis. If you’ll recall, that was the greatest financial crisis in more than 80 years: A crisis so terrible that the Fed implemented policies that were previously unthinkable.

A Picture is Worth 3 Trillion Words

Take a look at the chart below.

This is the Fed’s balance sheet over the last 16 years. This is a means of measuring how much money the Fed has printed in order to buy assets from Wall Street.

That little jump on the left? That’s the Fed’s response to the 2008 crisis. Now compare that to the massive vertical rise that occurred in 2020 (the large jump on the right). 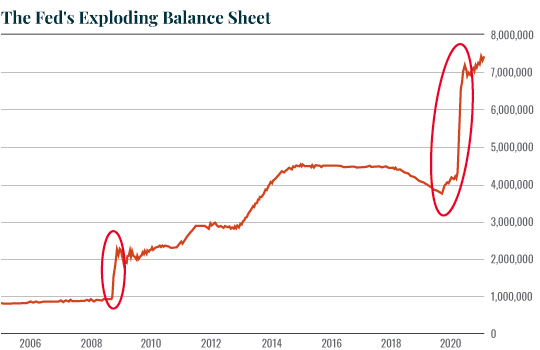 Again, the Fed has printed an astonishing amount of money, even when you compare it to crazy things the Fed has done in the past. And by the look of things, the money printing is only going to get crazier from here on out.

The Fed has committed to buying $120 BILLION worth of assets PER MONTH for the foreseeable future. This means the Fed will be printing upwards of $1.4 TRILLION per year going forward.

That’s roughly the size Russia’s GDP (the 11th largest country in the world).

The Biden Administration will soon sign off on a $1.9 trillion stimulus program. It has also proposed a $2 trillion infrastructure program, as well as a $1.7 trillion climate change program.

That’s an additional $4.7 TRILLION in money printing on top of what the Fed is already doing ($1.4 trillion per year).

All of this is going to unleash an inflationary storm, the likes of which we have not seen in decades.

And the markets know it.

Take a look at what the yield ratio between Inflation-Protected Treasuries (TIPS) vs. normal Treasuries is telling us. 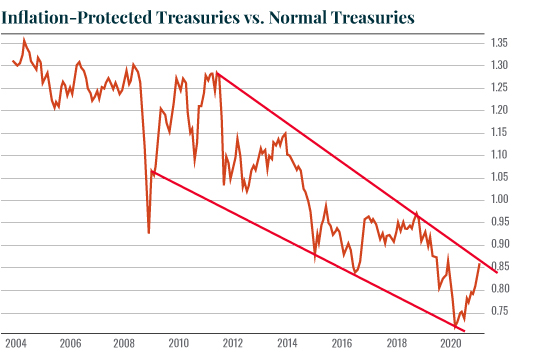 You’re looking at a 10-year deflationary downtrend ENDING as inflation begins to rip through the financial system. In the simplest of terms, this chart represents the bond market SCREAMING, “INFLATION IS ABOUT TO HIT.”

Again, an inflationary storm is coming. And it’s going to annihilate most investors.

Those who are properly prepared, however, will make literal fortunes.

This Has Never Before Happened in History