Things are “Bubbling” All Over

So far this week I’ve laid out:

I bring all of this up because the markets are clearly bubbling up. And in this particular case, the bubble is in EVERYTHING, truly an Everything Bubble, driven by central bank liquidity.

All of this is the product of the Fed and other central banks pumping trillions of dollars of money into the financial system. The Fed has printed so much money and bought so many assets that it now owns more than $2 TRILLION worth of mortgages, and nearly 20% of ALL Treasuries!

And the craziest thing of all?

The Fed has shown ZERO signs of stopping. If anything, multiple Fed officials, including Fed Chair Jerome Powell have stated that they expect to continue the Fed’s $150 BILLION per month Quantitative Easing (QE) program for at least 24 more months.

Again, we are in a bubble. It is truly THE Everything Bubble: a bubble in every asset class, including gimmicks. Heck a guy just sold a Non-Fungible Toke (NFT) of a fart!

When will it all end? And how bad will the coming crash be?

To figure that out, I like to use my Bear Market Signal.

If you’re unfamiliar with my Bear Market Signal indicator, it has caught every major bear market in the last 20-plus years.

I’ve identified the "previous signals on the chart below. Using this trigger, you’d have avoided 90% of the carnage during the Tech Bust and the Great Financial Crisis of 2008. 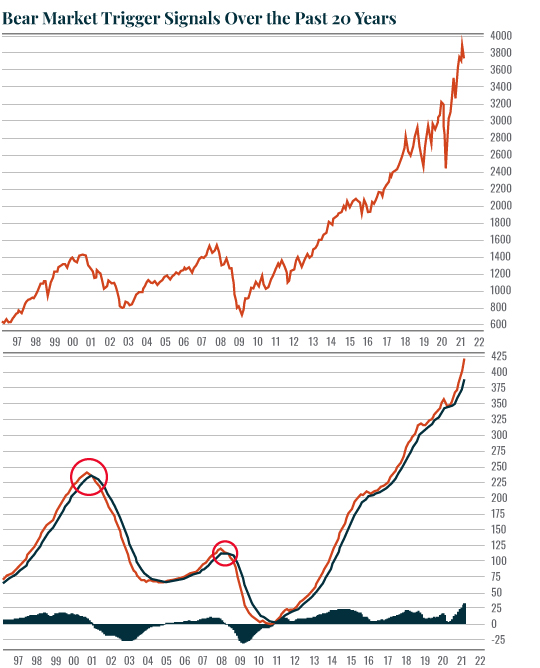 We came darn close to triggering this signal during the COVID-19 meltdown but managed to just avoid it by the fact that stocks closed April 2020 up. Had April been a down month we would have a confirmed signal.

How does this signal work? And is it close to triggering a new signal?

To explain all that, I’ve written a special report called BEAR MARKET SIGNAL: The Secret Signal That Has Called Every Crisis in the Last 20 Years. It reveals a specific combination of technical indicators — a combination I’ve spent years developing and testing — that will tell you when the market is poised to tank.

I wrote it exclusively for my Strategic Impact subscribers. But I’d like to offer you access to it as well.

Inflation is Now Entering Its Final and WORST Stage