The bears had their chance to drop the market. They failed miserably.

Stocks are up this morning. Tomorrow is a holiday, so most of Wall Street is away from their desks. That means trading volume will be light, and the market will be easily manipulated by the few traders still at their desks.

Again, it is clear the bears have failed miserably. They had a window to spike stocks lower into the quarter’s end and they failed. The S&P 500 hit a new all-time high breaking through resistance (red line in the chart below). 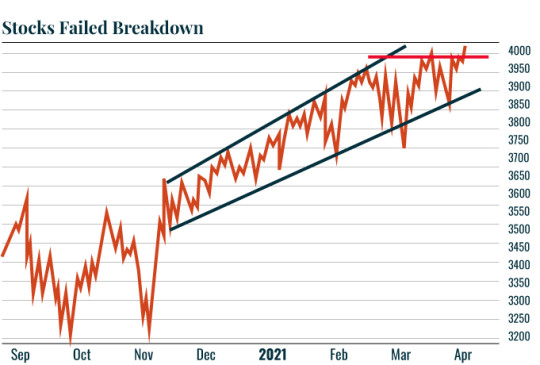 The door is now open to a run into the 4,000s. I expect this will be a slow, choppy grind higher, much as the market has been acting in the last three months.

Because the Fed has signaled that it is going to print some $1.4 trillion per year for the next two years to support the markets.

By most measures, the U.S. economy is returning to normal. Despite this, the Fed has stated point blank that it will not tighten financial conditions until 2023 at the earliest. Over the same time period, the Fed plans to spend some $125-$150 billion per month in quantitative easing (QE).

You Can’t Fight the Fed

It is VERY difficult to fight that much free money being handed out to Wall Street.

The unintended consequence of this is that it is unleashing inflation. As I’ve stated multiple times before, the Fed’s OWN RESEARCH shows that food inflation is the best predictor of future inflation.

With that in mind, take a look at what corn, soybeans and wheat are doing… and what they did yesterday while the Fed was arguing there are no signs of impending inflation. 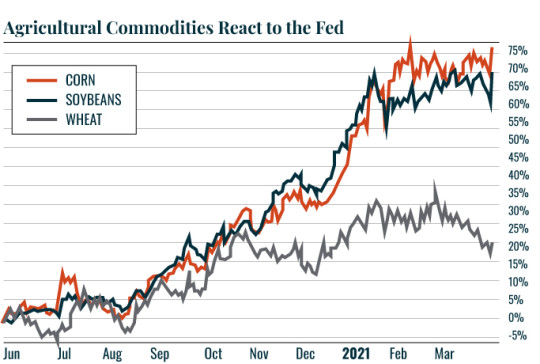 Wheat, which is the worst performer, is up 20% in the last year. Corn and Soybeans are up over 60%. Both of those latter commodities were LIMIT UP yesterday by the way.

So, what does this mean?

The Fed wants a bull market at any cost. That bull market is going to be driven by a truly staggering amount of money printing from the Fed. And this has unleashed inflation.

I’ll detail how to play this in Monday’s missive.