The markets are chopping this way and that, as the bulls and bears battle it out.

The bull argument is that we are entering April which, historically, is a solid month for stocks.

The bear argument is that the economy is about to be hit with tax hikes by the Biden administration; along with the fact that inflation is rising rapidly, which will force the Fed to tighten monetary policy sooner than most realize.

In terms of gauging what’s to come, I’m watching two stocks in particular.

These are two of Wall Street’s darlings run by two of the most popular CEOs Elon Musk and Jack Dorsey respectively. They are true market leaders, having led the market to the upside from the March 2020 lows.

As such, they provide a glimpse of what’s to come for the broader market.

TSLA (I’ve written about its importance in the market before) has held up reasonably well since early March. The stock is forming a clear bull flag (blue lines). If it can stage an upside breakout and break above resistance (red line) then stocks are off to the races. 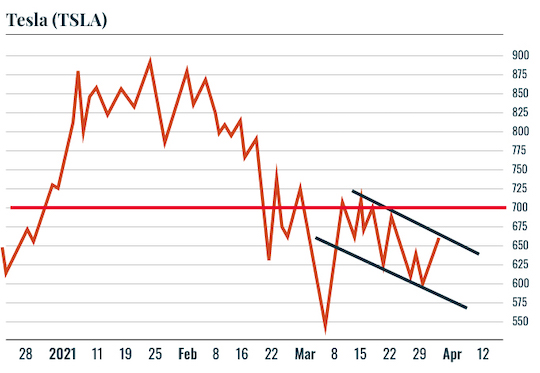 It’s a similar story with SQ though in its particular case the company has already broken out of its bull flag. Next up is overhead resistance at $245. If SQ can break above that line, again, we are off to the races. 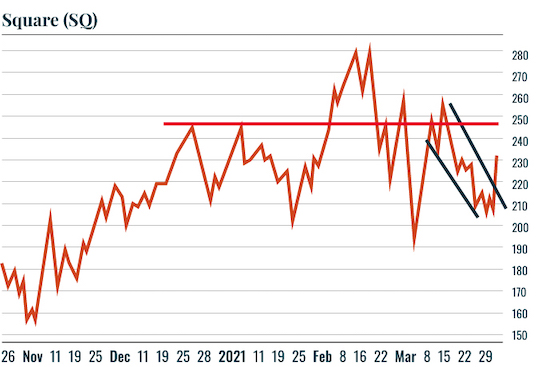 Put it together and we are getting signs that momentum is coming back into the market. We will get confirmation that this is the case when these two stocks break out above resistance. At that point it should be safe to move back into tech and momentum stocks.