The Biden administration blamed the Delta variant for the abysmal jobs report on Friday (725K jobs were expected, but only 235K jobs were created). However, the reality is that the U.S. economy is in very serious trouble regardless of any variants of any viruses.

Economies are not like light switches: you can’t just turn them off and turn them back on again without major problems. So, when policymakers pushed for economic shutdowns in 2020, they were in fact engaging in the greatest economic experiment in history to the tune of trillions of dollars and millions of jobs.

Fast forward to today, and despite over $13 trillion in federal stimulus over the last 19 months, the economy is in tatters. Half of small businesses can’t fill job openings and some 10 million people are still on unemployment benefits.

Remember, inflation arrives in stages. It’s not as though it appears overnight and suddenly the cost of everything rises.

Instead, inflation slowly works its way into the financial system in price hikes in the following prices.

I noted previously, that as of June of 2021, we had all three phases in place. We’ve now come to the worst part, which is when prices are rising so rapidly that workers are demanding higher wages to maintain living standards.

That’s when inflation begins to truly get out of control. And we are now there.

If you think this won’t end in disaster, you are mistaken. During the last major bout of inflation in the 1970s, stocks eventually crashed some 50% once inflation began to spiral out of control. 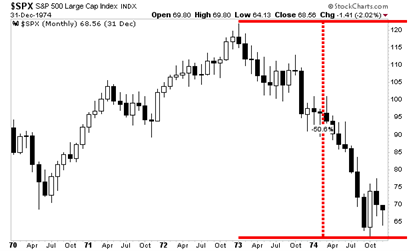