The S&P 500 broke down to test the lower line of its uptrend (blue lines). I’ve drawn the key lines of support that stocks NEED to hold in green in the chart below. If we take out those lines, then something is VERY wrong in the financial system. 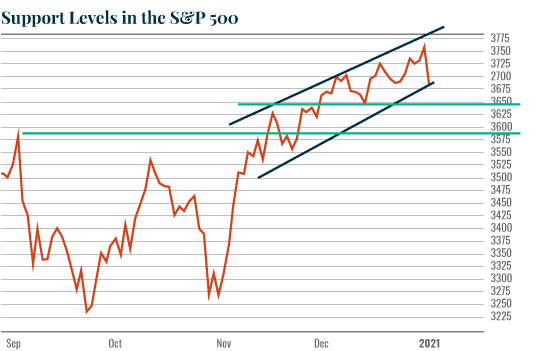 There is certainly no shortage of reasons for the volatility. In the next week we have:

All in all, things are a mess…

The U.S. political situation in particular is murky as, by law, until President Trump concedes or Congress ratifies Joe Biden as the winner of the election, there is no real president elect.

The minutiae of the situation in Congress regarding the presidential vote is outside of my area of expertise, but there is at least one example in which a president was not decided until literally three days before Inauguration Day (January 17). That occurred when several states contested their election results and sent multiple slates of electors. Subsequently, a special election commission was set up to decide the election outcome.

Will this happen again today and tomorrow? Will President Trump finally concede? Will the GOP or the Democrats win the Georgia Senate runoff? Who knows. It’s a total crapshoot and anyone who argues otherwise isn’t being honest.

With all of this in mind, I’d recommend the sidelines for this week. Let this mess clear up and then make a move.

A breakdown here could have serious implications for U.S. stocks and more…