Why Does the Fed Want to CREATE Inflation?

The U.S. Dollar has been strengthening. A strong dollar is not necessarily a bad thing, but it runs completely contrary to the Fed’s stated goal of creating inflation. 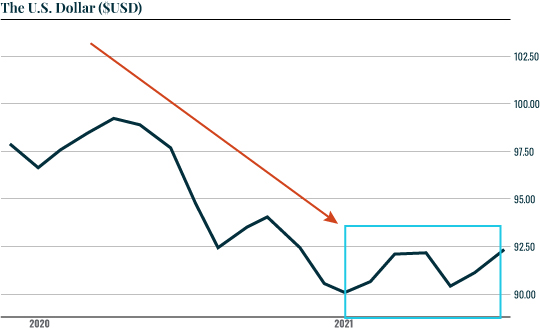 And therein lies the problem.

In order for the bond market to absorb the massive debt issuance the U.S. generated in 2020 (the U.S. ran a $3 trillion deficit that year), it required higher yields. In simple terms, this was the bond market saying, “If you want us to buy all of this debt, you need to pay us more.” You can see this in the chart below. 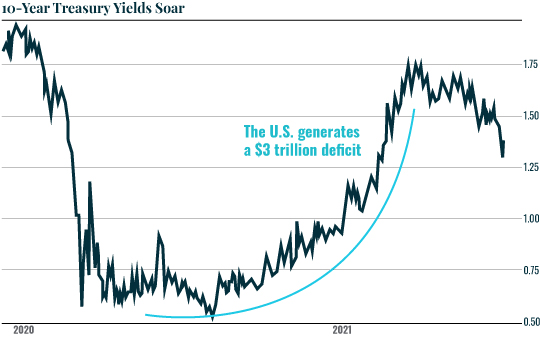 This changed in 2021, when bond yields began to roll over as it appeared Congressional gridlock would limit the Biden administration’s plans on spending some $6 trillion. Yields started to come down as the bond market began to process this information.

But that doesn’t mean the $USD at current levels isn’t a problem. Even if the Biden administration can’t run a $6 trillion budget, it will still run a $3-plus trillion deficit. Indeed, the U.S. is already $2 trillion in the red as of June 2021.

The stronger the $USD is in this environment, the more “expensive” it is for the U.S. to repay its debts. A big factor behind the Fed/Government’s scheme to foster inflation, is that it means the U.S. can pay back its debts with dollars that are technically worth less.

But if the $USD stays strong, it becomes more expensive for the U.S. to finance its debt loads. And with total public debt north of $28 trillion, this can be a real problem.

I’ll outline why in tomorrow’s article.

The Newest Tool in the Fed’s Bag of Tricks

When all else fails…