We are currently outlining the ridiculousness of Janet Yellen’s most recent assertion concerning the United States’ outrageous spending programs.

Now, public officials make ridiculous statements all the time. But Janet Yellen isn’t some mid-level bureaucrat. She’s the Treasury Secretary of the United States, tasked with overseeing the financial system and U.S. economy.

With that in mind, it is truly horrifying that Ms. Yellen believes congress should pass President Biden’s $4 trillion spending program even if it results in higher inflation and higher interest rates — because both would be good for the U.S.

Yesterday we illustrated how inflation is already roaring in the U.S. And because incomes are not rising at a similar pace, it means the cost of living is rising for the average American. That is not a good thing in the slightest.

Today, I’d like to tackle the second part of Secretary Yellen’s ridiculous statement: Higher interest rates would also be good for the U.S.

The Threat of Higher Interest Rates

To be fair, higher interest rates would, in fact, be GREAT for retirees and those who depend on interest income. Because the Fed has cut rates to ZERO, these people are being severely punished.

However, outside of this, higher interest rates would be a DISASTER for the U.S. financial system.

Over the last 35-plus years, the yield on the all-important 10-Year U.S. Treasury has been in a clear downtrend. In simple terms, this means it has been getting cheaper and cheaper for the U.S. to issue debt over this time. 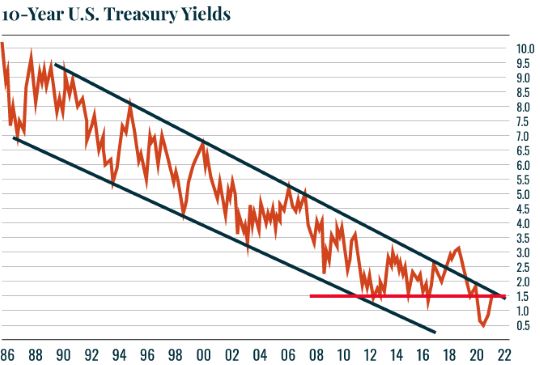 This is why the U.S. has been able to grow its debt load from a mere $1.9 trillion to over $28 trillion where it stands today. 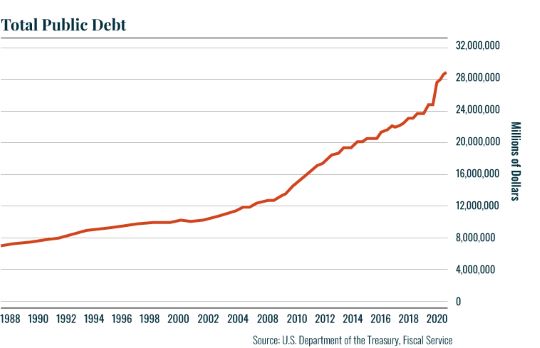 Now, as I’ve mentioned many times before, the 10-Year U.S. Treasury is the single most important bond in the world. The yield on this bond represents the “risk free” rate of return for the ENTIRE financial system. It is literally the level against which all risk assets (stocks, commodities, real estate, etc.) are priced.

If the yield on this Treasury were to spike higher, ending its downtrend, the U.S. would enter a debt crisis relatively quickly. Indeed, the last time the yield on the 10-Year U.S. Treasury broke out to the upside was in 2018. That’s when stocks nose-dived, dropping 20% in a matter of days: 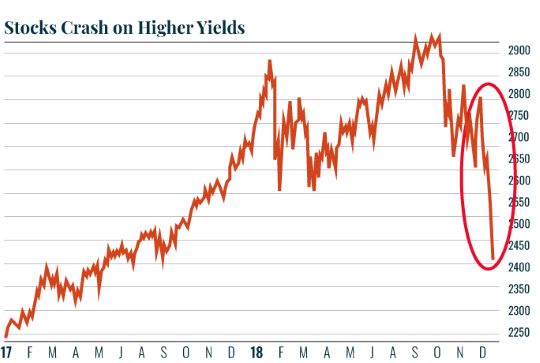 Bear in mind, the U.S. only had $23 trillion in debt back then. We’ve since added another $5 trillion… and that’s BEFORE President Biden’s proposed $4 trillion spending program. The one Treasury Secretary Yellen thinks would be a GREAT thing for the U.S., even if it means higher interest rates.

As I write this, the yield on the 10-Year Treasury has broken through CRITICAL resistance (red line in the chart below) before being rejected by the top of its downward channel (top blue line). If it turns back up here, it will break its downtrend for only the SECOND time in over 35 years.

This will unleash a market meltdown and possible debt crisis in the U.S. The fact the single most important financial official in the U.S. doesn’t understand this is truly terrifying and only adds to the odds of this happening later this year.