On Friday I outlined how the latest inflation data is terrible news for stocks.

As a brief recap, the official inflation measure, the Consumer Price Index, or CPI, is gimmicked to the point of fiction.

The reason for this is simple: this is the number everyone looks at. And if it reflected reality, Americans would realize that "quality of life" in this country has been in decline for the last 40 years as real costs of living have dramatically outpaced the rise in incomes.

Because of this, if you’re interested in getting a more realistic measure of inflation, you need to look at the Producer Prices Index (PPI), the CPI’s less known, less watched, but more accurate cousin.

Unlike CPI, which is crafted by bean counters at the government, PPI is based on actual information from actual producers of goods and services who must adjust their costs based on inflation or lose profits in the real economy…

Which is why the latest PPI data point is catastrophically bad, clocking in at 8.3% year over year (YoY) for the month of August.

In simple terms, inflation is roaring higher today. Many investors believe this is great news for stocks. And they are greatly mistaken.

During the last major bout of inflation in the 1970s, stocks initially ripped higher for a few years before crashing ~50% erasing all of their gains and then some. Even worse, the stock market finished the decade having gained ZERO in 10 years. 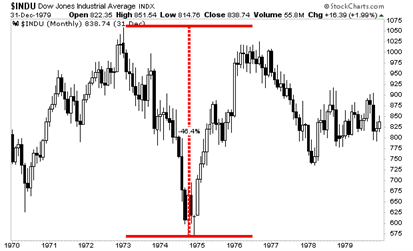 With inflation roaring higher once again today, we have to is ask… are we due for another similar period of low returns?

Unfortunately, I believe it’s very possible. Stocks are extremely overextended above their 50-month moving average (MMA): the line that has served as a guide throughout the bull market started in 2009.

Any time stocks get this stretched above this line, there is a “snapback” at some point to test the 50-MMA. This would mean stocks collapsing some 40% to 3,100. 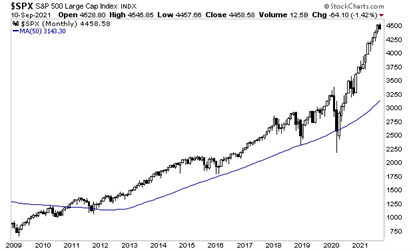 I’ll outline how to profit from such a move in tomorrow’s article. Until then…