Over the last two days, we’ve outlined why the U.S. needs to devalue the U.S. Dollar ($USD) in order to “inflate away” its massive $28 trillion debt load.

However, the Fed doesn’t want bond yields to spike based on the inflation that this would unleash. Consequently, we believe the Fed will soon adopt a policy called “yield curve control” through which it would simply print money to buy U.S. Treasuries anytime their yields rise above a certain level.

If this idea sounds insane to you, consider that Japan has been doing it for the better part of the last 5 years (since September 2016). Any time yields on 10-Year Japanese Government Bonds (JGB) rise above 0%, the Bank of Japan (BoJ) prints new money and uses it to buy them.

As you can see, this campaign has been relatively successful with yields hovering around the BoJ’s goal or trading well below it. 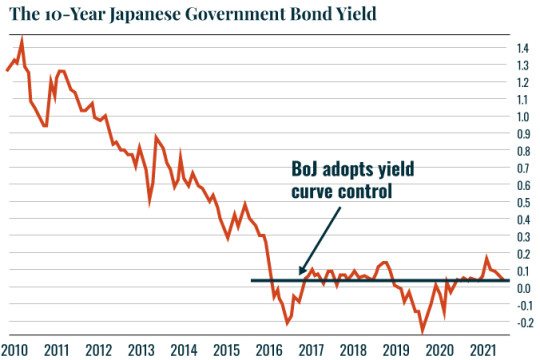 So why would the Fed do this?

Because it allows the Fed to technically run an open-ended Quantitative Easing (QE) program without committing to a certain amount like its current QE program of $120 billion per month.

While both methods of QE are technically open-ended, yield curve control appears to involve printing less money. As such it is seen as less inflationary.

Additionally, yield curve control makes the Fed’s policies appear to be focused on keeping bond yields at certain levels which, with $28 trillion in U.S. public debt, would be seen as an issue of systemic importance.

Put simply, yield curve control has a “goal” in mind and doesn’t appear to be simply printing billions of dollars mindlessly every month.

It is clear that the Fed has realized its policies are politically toxic. For one thing, they’ve generated massive wealth inequality as the wealthy can leverage up to take advantage of the bubbles the Fed has created in stocks and real estate.

And, of course, there’s also the fact that the Fed’s monetary interventions to benefit big business are over $2.5 trillion, while it barely spent $7 billion on Main Street and small businesses.

Put simply, yield curve control allows the Fed to continue printing money and cornering the bond market without the political consequences of traditional QE programs. For this reason, it is highly like the Fed will launch it in the next six to twelve months.

This is particularly true with inflation heating up. I’ll outline why in tomorrow’s article.

Inflation Update: Even the Fake Numbers are BAD